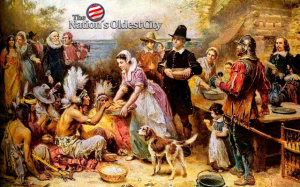 Every forth Thursday in November is designated as Thanksgiving Day in the United States.  This federal holiday serves as a time to give thanks and express gratitude as well as a remembrance of the Thanksgivings from past particularly the well known celebration of 1621 which included both Plymouth Pilgrims and Massasoit Native Americans.  However, this wasn’t deemed Thanksgiving, these same pilgrims wouldn’t have an official Thanksgiving celebration until 1963.
Thanksgiving holidays have been around for centuries, beginning as a celebration of the fall Harvest and as a way of giving thanks long before settlers came to America.  Some are surprised to find the first Thanksgiving in the U.S. which actually occurred in 1565 was conducted by the Spaniards when they landed in what is now St. Augustine, Florida.  There was also another Thanksgiving prior to the famous 1621 when a group of English settlers had a day of Thanksgiving when they arrived in 1619.
Thanksgiving Days were first official proclaimed by Congress as early as 1777 during the Revolutionary War to mark significant victories.  From that time until 1863 various Presidents also proclaimed days of thanksgiving throughout the year but there was no official date.  Then in 1863 President Lincoln set an official Thanksgiving Day to take place on the third Thursday of November which has remained the standard since.  The tradition of a Thanksgiving feast has also remained until this day.  In America Thanksgiving has become the marker of the beginning of the holiday season.

Why do we eat turkey for Thanksgiving?

Although juicy and tender butterball turkeys are the main cuisine of today’s Thanksgiving celebrations, these birds were NOT the most popular centerpieces on the first Thanksgiving tables.
In 1621 when the Plymouth colonists and Wampanoag Indians celebrated the first Thanksgiving, they were gobbling up many more foods than just turkey. Since lobster, goose, duck, seal, eel, and cod were plentiful during this time, these foods were most likely the main courses of this first feast. Deer meat and wild fowl are the only two items that historians know for sure were menu of this autumn celebration.
So how did the turkey become the main mascot of modern-day Thanksgiving if we don’t know for certain that turkeys were at this first feast?
One story tells of how Queen Elizabeth of 16th century England was chowing down on roast goose during a harvest festival. When news was delivered to her that the Spanish Armada had sunk on it way to attack her beloved England, the queen was so pleased that she order a second goose to celebrate the great news. Thus, the goose became the favorite bird at harvest time in England. When the Pilgrims arrived in America from England, roasted turkey replaced roasted goose as the main cuisine because wild turkeys were more abundant and easier to find than geese.