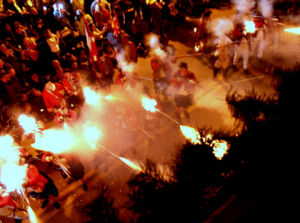 in The City of Saint Augustine to be held on Saturday Evening, The 3rd of December 2011 8 o’clock PM.
Starting at Government House, at West End of the Plaza, looping through Downtown St. Augustine to the City Gates, and returning to the Plaza.  Loyal Citizens are asked to Partake of this Merriment, bearing Candles or Lanterns to light their way, making merry with Good Company.  The Parade shall conclude at Government House with Muskets firing Volleys of Joy, and Christmas Caroling in the Plaza.
In early December of each year, historic St. Augustine celebrates its brief 18th Century British occupation during the annual British Nightwatch and Grande Illumination. The event draws thousands to the streets of Florida’s ancient city that is already aglow with millions of tiny white lights for its Nights of Lights celebration.
Parade Route Information
The Grande Illumination – British Night Watch Parade will begin at the Plaza, in front of Government House, at 8:00 PM. The Parade will leave St. George Street in front of Government House, heading south across King St. to march down St. George to turn left on Cadiz St. to march down to tune left on Aviles St. Then down Aviles St. back to King, around the Plaza to Cathedral, then right onto St. George Street. Marching down to left on Hypolita St., right onto Spanish St. down to Orange, where we turn right & march to the City Gates, were we march through and back down St. George Street back to Government House
The BEST place to be for the parade if you are a spectator is in the Plaza, and plan to be in place around 7:30 PM to get a good spot. Once the parade gets started you may follow behind if you wish. The Tradition is to carry a candle or lantern as part of the parade. Candles will be available for a small donation.
For more information see www.britishnightwatch.org