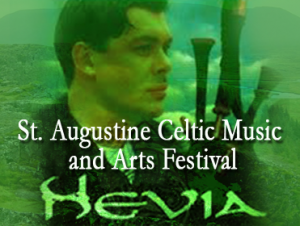 On March 11-17, many of the greatest Celtic musicians, artists and poets from Ireland, Spain, and the U.S. will converge on the wonderfully romantic city of St. Augustine, Florida, for the Celtic Music and Arts Festival. The week-long festival will arguably be the finest international collaboration of Celtic music and art ever seen in the United States.

Presented by Romanza in association with Meehans on Matanzas, the festival will be directed by internationally-acclaimed Benny O’Carroll of County Kerry, Ireland.  Following exciting weekend concerts, day-long festivities will continue throughout the week.  Celtic masters will present traditional pub music sessions, contemporary and classical musical performances, workshops, dancing, storytelling, good humor, and lots of good food – all of which will culminate with the ultimate Celtic Party – St. Patrick’s Day!  The celebration will include a St. Patrick’s Day Parade beginning at 10 a.m. on Saturday, March 12.

St. Augustine,the nation’s oldest city, was founded by don Pedro Menendez de Aviles in 1565.  Appropriately, the festival headliner is HEVIA from Aviles, the hometown of the city’s founder and the heart of Celtic Spain.  The band HEVIA is a Spanish Celtic phenomenon.  Jose Angel Hevia has become an international sensation, revolutionizing popular music with his midi bagpipe and selling 2.5 million albums worldwide.